Not Another Happy Ending DVD Review 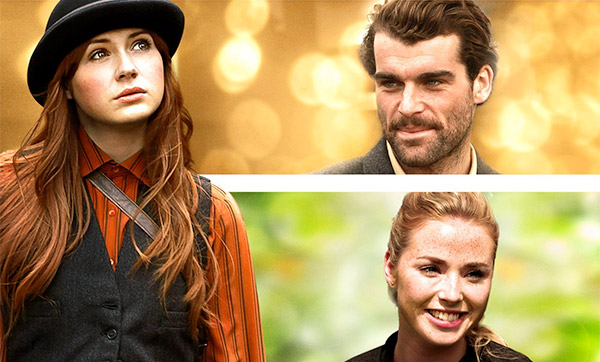 When I first heard Karen Gillan was jumping onto the big screen, I was very happy for her and very interested to see what she would do. As far as I know “Not Another Happy Ending” was the first big screen project she did. She is going to follow this with “Oculus” and “Guardians of the Galaxy” this year. So her career is pretty much made now that she’s gone from indie rom-com, to indie horror to a film that’s part of the (soon to be; as they have plans to continue the Marvel Cinematic Universe up till 2028 so far) highest grossing film series in the history of cinema. When I first watched the trailer for this film I was quite excited. It looked like it would be one of the few well made Rom-Coms out there.

Directed by John McKay and written by David Solomons, Not Another Happy Ending tells the story of Jane Lockhart (Karen Gillan) a young author whose first published book becomes a massive success and keeps Tom Duvall’s struggling publishing company afloat a while longer. The two initially despise each other and so they both push for Jane to finish her contract for a second novel as quickly as she can so that they can both be rid of each other. However, Jane cannot write when she’s happy. It then becomes Tom’s mission to make her miserable but, because this is a rom-com don’t forget, he ends up caring about and falling in love with Jane.

Now, this film is so indie, I hadn’t heard anything about this film beyond that it existed and that it had Karen Gillan in it. And the trailer was good. So it was nice to go into the film without any particular expectations, beyond hoping that Gillan’s big screen debut didn’t suck.

For the first ten minutes, however, I thought that the film might very well suck. The pace is so fast in the first ten minutes it comes across as rushed and choppy and poorly edited. The rate that Jane goes from being grateful to her new publisher, to getting her book published, to despising her publisher is just far too fast. We don’t really get much explanation for why they end up really not liking each other at first beyond the fact that Tom changes the title of her book. And another thing, they try to make Jane Lockhart so “quirky” that it feels forced; really forced. By the time the film reached the eleventh minute I was starting to wonder if this (sitting down and watching the film) had been a good idea. But then everything turned around; better late than never.

The film takes time to breathe then and I found it to be relatively amusing in parts. I don’t find many rom-coms all that funny so I wasn’t expecting any great humour from this. I was hoping for an interesting story, interesting characters and enough sloppy romance to fill my needs. The film gave all these, for the most part.

Karen Gillan’s acting is actually pretty good, I had worried how I would adjust to seeing her in a new role after seeing her for so long in Doctor Who. Thankfully, Jane is fairly different from Amy Pond and Gillan portrays her well. She doesn’t get very many subtle moments to play with, the film isn’t all that subtle to begin with. But the best scenes involving Gillan are with Jane’s father, who is played by the fantastic Gary Lewis. The chemistry between the two is quite nice and there are some touching moments between them. Stanley Duvar, as Tom, is also quite amusing to watch but didn’t really do anything particularly noteworthy.

Not Another Happy Ending is a small, nice film, with a script that starts off a bit confused but then slowly finds its feet. The cinematography and directing are both competent enough and the performances are nice enough and the story is your usual rom-com affair, but it’s all very nice. It’s okay, on par, run of the mill. It’s a nice watch. That’s all you can say about the film. It’s not great, but it’s alright. It’s sweet. I’ve heard good things about Karen Gillan’s new film Oculus though and I intend to watch that as soon as possible.