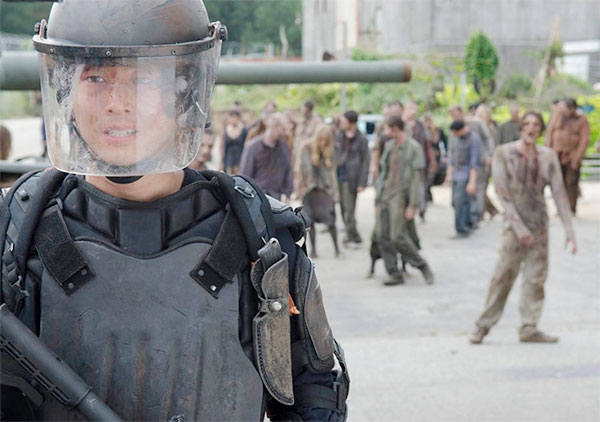 Rather than taking us around the group one by one over the course of a few weeks, TWD has simply decided to depict what happened next to three of the show’s most important characters in “After” and throw the rest into an energetic, follow up that was this week’s “Inmates”. In all, this made for a fast paced, yet informative episode that’s cleared up a few questions and in return given us some more.

Firstly, it’s no secret that just about everyone’s favourite character remaining in the series is Daryl. What’s not to like – he’s a badass with a crossbow and a pair of guns so whether you’re a guy or girl there’s something to tune in for. So with that being the case, the writers decided he’d be perfect candidate for balancing out the worst character left, in the form of Beth. In all fairness, she’s not had much chance to shine and has often been there to look after the kids or hold the baby with Lori gone. A simple move that’s probably going to work as long as Daryl isn’t hampered with her on his own for too long. Their early segment didn’t have much going on, other than setting the ball rolling for the episode.

Next we come to Tyreese and as predicted by many, he has the baby, if you’ve read the comics you’ll know that the series has played the ‘safe card’ here. If Judith still being alive didn’t shock you, then maybe the sight of Lizzie trying to suffocate her to stop her crying, or Carol’s well-timed return, should have. Even though she’s clearly a sociopath, Lizzie is fast becoming one of the most interesting characters on the show. This is the reality of the situation, no more innocence or distractions, these kids are growing up in an apocalypse and they are beginning to reflect the true nature of survival within it.

Carol was clearly hesitant with Tyreese and now knows that Rick didn’t tell him the truth about what happened. Looking back it’s fairly obvious that these two would’ve been placed together as this is the only way Carol will be able to rejoin the group in the long term. Speaking of terms, what is the Terminus? A new Woodbury or something else? Whatever the case it looks like all roads are about to lead there.

Elsewhere, Maggie’s brutal attack on the bus was one of the episode’s best moments even though it was fairly obviously that Glenn would’ve survived. Sometimes when we see these sorts of sequences play out it just feels a little pointless as we’re not really going to see the death of a character like Glenn off-screen. That said, you really felt Maggie’s pain as she picked off each of the former Woodbury/prison folk in the hopes of finding her hubby.

Glenn being back at the prison was a brilliant twist and one that few would’ve thought about. It did beg the question however as to when he found himself atop of the broken bridge, there was no sign of him up there when the tank blew a whole through it and as he glanced back it seems he must have made it across before this happened. Regardless, it was good to see Glenn back and even better to see he has regained enough strength to don some riot gear and fight his way out of the oncoming hordes.

Picking up Tara was another shock in this week’s, surprise-filled edition of season 4. Personally I think this is a fine move as it keeps the group growing and it will surely be remarkable how Maggie will react when she eventually catches up with her.

The last few moments of the episode drove straight out of the comics, after the likes of Michonne, the Governor and Tyreese, Abraham and his crew are the next big personalities to make the leap onto the small screen.

Scene of the Episode: Glenn’s Escape ­– The POV shot inside the riot gear was an incredibly fun idea to do that gave us a true perspective of just how scary this moment was for the character.