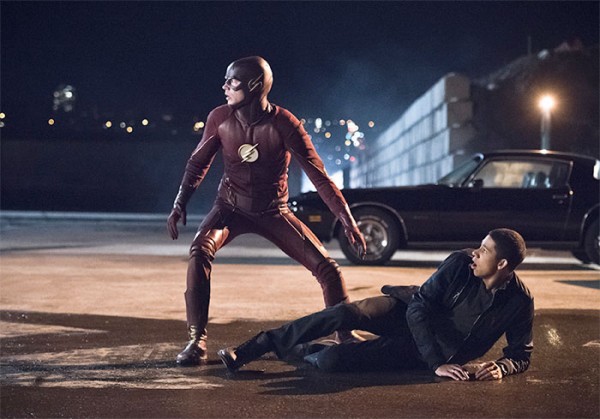 From the pilot, it was abundantly clear that a central theme of The Flash was family, as explored through the prism of the dysfunctional Wests. However, the West family have generally taken a back-seat this season thus far, with Iris in particular getting short shrift as the doomed Patty/Barry romance rose and fell. Despite this general lack of focus, the introduction of Wally seemed to have given the West family’s subplots a surge of energy last week, so did the West-centric Fast Lane keep up that momentum?

I’ve been using the word ‘filler’ in my reviews of Flash and Arrow a great deal since the shows have returned from their mid-season break, as the two superhero shows have found themselves in that awkward interim period between mid-season and the big February sweeps episodes. Fast Lane, in many ways, is unashamedly filler with an extraneous villain who will almost certainly never appear again and subplots that are neatly wrapped up within the episode – but despite the general lack of essentialness to the season’s plot arc here, I found this to be a surprisingly solid instalment and an effective lead-in to the upcoming two-parter. The Flash has been surprisingly dark and dour since its 2016 return, so despite the incremental plot advancements, Fast Lane refreshingly nudged the series back in the direction of lightness and fun, with a central character who once again possessed the exuberant optimism that makes this show stand out from the crowd.

Character drama was the order of the day here, and Fast Lane did a solid job on most accounts. After a season where she’s generally been confined to minor subplots, Iris assumed a more prominent role this episode to decent results. At the start of the season, The Flash seemed to be floundering with what to do with Iris post-Eddie, but it seems to have found a sustainable place for the character as the reckless investigative journalist who digs into the street-level issues Team Flash usually pass over and as the concerned sister trying to cohere her unusual new family into a workable and honest whole. The journalism side of the equation is generally stronger here, due to the way it portrays an intriguing flaw that seems to be emerging within her character while efficiently pushing the plot forward, while the scenes with Wally do become a little circular in nature, hitting the same emotional beats over and over in a way that does wind up becoming a little tedious despite the strong dynamic that Candice Patton and Keiynan Lonsdale have quickly created. Despite this, the Iris/Wally relationship does show signs of becoming more entertaining and dynamic throughout the episode, culminating in a nice little scene that encouragingly points to a more friendly relationship between brother and sister from here on out.

Joe also got a little more than usual to do here as he confronted his treatment of his new son. Joe’s moist-eyed, choked-up speeches to his family members can be performed pretty much effortlessly by Jesse L Martin now, but it’s impressive how he continues imbue relatively basic emotional dialogue with the heart and emotion typical of a far more complex and nuanced script. It was also notable to see The Flash flip the script somewhat concerning Joe’s role as a father figure. Joe’s intentionally laid-back, friendly attitude towards Wally is startlingly different to his stern, paternalistic behaviour towards Barry at the start of season one, showing how Joe has quietly undergone some really significant changes in a seamless and cleverly subtle manner.

And then there’s Wally, who’s significantly more watchable this week. Early appearances did portray Wally as a little whiny and petulant, and even if that attitude was justified, it wasn’t particularly entertaining viewing. Fast Lane manages to bridge the gap somewhat by keeping elements of that clear disillusionment and confusion that, fittingly, still lingers in Wally’s attitude this episode, while also allowing Wally to crack a smile and generally have a little bit more fun, as well as finally opening up to his family. Keiynan Lonsdale has made a promising start to his presumably to-be-significant role as the future Kid Flash, displaying an impressive emotional versatility that shows great promise for whenever Wally gains the ability to travel at the fast speed he craves.

As solid as the West drama was, the strongest part of this episode was undoubtedly Wells. Fast Lane finally delved into the psychological impact that Zoom’s conscription of Wells was having upon him, twisting the knife by placing an emerging mentor/mentee relationship between Wells and Barry at the forefront. This dynamic between the two excelled here because it’s steeped in the show’s own history – while the father figure relationship between ‘Wells’ and Barry last season emerged on the part of Wells deliberately trying to manipulate Barry, it’s Barry who is the main catalyst for this unusual new mentor/mentee dynamic’s emergence. There’s a feeling that Barry is trying to consciously replicate his previously ideal dynamic with Thawne that’s founded on genuine honesty with no secrets to hide, with Grant Gustin really selling Barry’s enthusiastic, earnest desire to earn the respect of Wells and regain a semblance of the dynamic that was snatched away from him. Barry’s desire throughout the episode, despite the irascible behaviour of Wells, to cultivate this new relationship lent a great sense of dramatic irony towards the episode, as the viewer had the painful knowledge that Barry was simply looking up to another father figure who would once again betray him.

From there, the storyline took a surprising left turn. There was every chance that The Flash could have dragged out this storyline for a few more episodes, leaving the revelation of Wells’ deal with Zoom until a vital point in the conflict where the betrayal would presumably slow the storyline down just when it should be speeding up. Thankfully, The Flash has been known for its frequently rapid plotting, and Wells’ surprisingly early reveal was a quick example of this. Tom Cavanagh continues to be an absolute gift for the show, delivering a performance that’s wracked with palpable guilt as Wells comes to realise the violent consequences of his actions, conveying Wells’ tumultuous emotional state in scenes where he has very little dialogue, relying mainly on mannerisms and facial expressions. The reveal neatly averts any concerns that The Flash was rehashing last year’s Wells plot by showing the fundamental decency and strong conscience that this Wells clearly possesses – while old Wells was hiding dirty secrets for years without an ounce of guilt, this Wells can barely stand to hear the consequences of his actions without feeling compelled to confess his sins.

Barry’s quick forgiving of Wells may seem like rushed plotting, but it’s overall a smart storytelling choice that cuts out what could have been weeks of meandering discussions with Wells in the STAR Labs prison while underlining the return to pure, old-fashioned heroism and forgiveness that this episode generally represented – it wouldn’t have felt right for the chirpier and more emotionally stable Barry we see here to condemn Wells. In many ways, this development is the reverse of what we saw from Patty – instead of uncharacteristically unsympathetic behaviour to drag conflict out, Barry’s forgiving and altruistic actions in Fast Lane feel like something that this iteration of the character would actually do, meaning that this episode generally has a much better handle on its central character than the previous couple of episodes.

Despite this strong character material, The Flash really didn’t know what to do with its villain in Fast Lane. Season two has only periodically used the villain of the week format, often opting for recurring villains that we know a great deal more about, so the issues with thin standalone villains have mostly disappeared this year. They returned in a big way here however with Tar-Pit, a villain so bland and colourless that I’ve forgotten his real name already. Tar-Pit certainly belongs in the ‘means to an end’ category of meta-humans in that he’s only in the episode to serve a clear plot purpose by pushing forward the West and Wells storylines, but that doesn’t excuse the utterly mediocre bad guy we get here. The only back-story we get is a generic, rehashed flashback to the night of the particle accelerator’s accident (ah, good times) featuring boring and thin criminals, with the viewer pretty much left to fill in the blanks such as Tar-Pit’s actual personality (this is important, I’m told), his motivations for hurting innocents and his experiences of having been stuck in the ground for two years. Tar-Pit should have been the solid fulcrum from which all the character drama could swing, but instead, at the core of Fast Lane, there’s an uninspired antagonist who fails to provide any kind of intrigue or excitement, whose storyline comes to a disappointingly abrupt halt with no real deliverance on the exciting potential that a genuine Flash vs Tar-Pit fight possessed. Fast Lane is generally earnest and likeable rather than mechanical and perfunctory, but Tar-Pit was unfortunately the very definition of a villain done by-the-numbers.

Ultimately, though, the choice to free Wells is notable for one main reason: it means that Barry has chosen to pick a third option for Wells… by travelling to Earth-2 himself. The trip to Earth-2 was relentlessly featured in the trailers for The Flash’s return, and it’s arguably the big storyline this season has been building to in the same way that season one built to the introduction of time travel around this point. With doppelgangers galore promised including villainous versions of familiar heroes such as Killer Frost (Earth-2 Caitlin) and Deathstorm (Earth-2 Ronnie Raymond), this two-parter is undoubtedly a hugely exciting prospect. And then, of course, there’s their ultimate target, Zoom – and it’s hard to imagine that they won’t run into Earth-2’s resident evil speedster at some point…

Fast Lane is a peppy, fun return to the earnest and light-hearted tone of season one, with a central character who’s drastically more entertaining to watch and emotional subplots that come to satisfying and well-rounded conclusions. Unfortunately, it also brings along a major season one flaw in the form of a thin and lazily crafted villain of the week whose presence seems utterly superficial. Despite that flaw, this is a solidly enjoyable slice of filler that tees things up nicely for this year’s big mid-season two-parter.