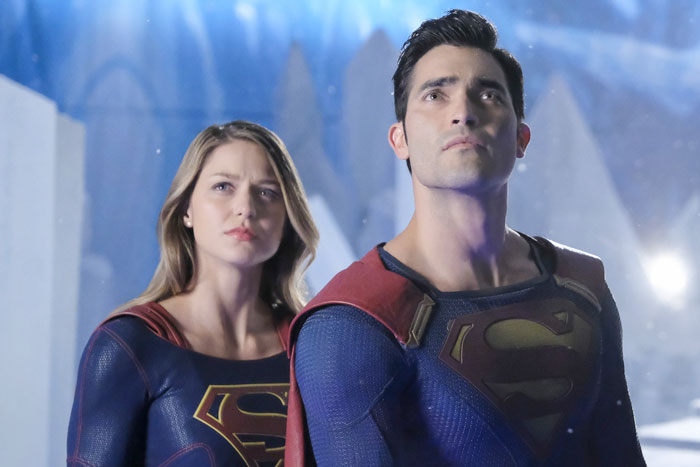 Supergirl’s second season finale—Nevertheless, She Persisted—gave us lots of reasons to have high hopes. Superman’s back, the Daxamite invasion hit its climax. M’Gann makes a surprise return, and even General Zod shows up. There are just so many big things happening, it’s no surprise that it’s full of thrills. But unfortunately, it’s also no surprise (based on the show’s track record) that the story lacks cohesion and feels like all the good stuff is held together by a variety of wasted opportunities.

The high point is undoubtedly the action sequences. The opening battle between Kara and her mind-controlled cousin is outstanding. It’s possibly the best-realized fight scene that we’ve ever witnessed on the small screen: fantastic pacing, great use of both high-energy action and slow motion imagery to make the battle visceral and impacting. Later, the story goes on to show a number of other cool punch-ups as well. None of them are quite as good as the initial one (although the duel between Supergirl and Queen Rhea comes close), but there are so many that there’s no disappointment.

But at the same time, it’s all undermined by clunky pacing and weak story logic. Why, for example, if Rhea could control Superman, did she just not do the same thing to Kara? Maybe she wanted to humiliate her son’s girlfriend by having her defeated by earth’s greatest hero? That would make a lot of sense, but it’s never stated. And when it’s so absurd that Rhea would take such a risk, than really you’ve got to address that in the story itself, or you leave the question hanging for everyone.

Another weakness is the plot point with Kara challenging Rhea to a duel according to some ancient Daxamite cultural practice. It’s a contrived idea that is lifted from about 100 other sci-fi shows. But more than that, it turns out to be literally a time-killing device—the battle has no bearing on the outcome of the invasion itself. Just like the big gun on top of the DEO last week, it’s thrown into the story as a way to fill in the story’s runtime until the more relevant stuff takes place. And once we’ve seen that Rhea actually feels no obligation to this outdated custom, there’s really zero motivation for Kara to stay in it. Indeed, it seems ludicrous that she sends Mon-El off to “be a hero” but she herself doesn’t get out there while aliens obliterate the city. It’s like she forgets she can fly and Rhea can’t. Of course, it makes sense that we want our main hero to be fighting our main villain, but it’d be nice if the story worked a little harder to justify itself.

But maybe the episode’s biggest disappointment is in the way it wastes Superman. Tyler Hoechlin’s Man of Steel was a high point of the season’s first couple of stories (and thus for the whole year) and so his return has been greatly anticipated. But now that he’s back, he feels like an afterthought. As stated, the fight with Supergirl is powerful, but after that he serves no story purpose (aside from the fact that his absence wouldn’t make any sense). He takes up plenty of screentime hanging out at CatCo or the Fortress of Solitude, but nothing he does couldn’t have been done with just Kara by herself. Even when the invasion gets underway, he seems to be just standing around and waiting for permission to go out and help. Really, his main function seems just to be to establish how great Supergirl is—by stating that she’s both the better fighter and the greater hero—and to lower expectations for the next time he appears.

Meanwhile, the ostensible heart of all of this is Kara’s relationship with Mon-El, but that’s not something easy to connect to. I’ve liked Mon-El and I like Chris Woods, but their relationship hasn’t anywhere new to go to for some time now. And there’s a weird air of finality and fatalism over Kara’s big sacrifice: nobody talks about trying to communicate with him, or to track him, or to call any of their myriad of alien friends for help. Instead, they just stick him in a missile—which is sitting in the middle of field for inexplicable reasons–and shoot it off into space. And Kara’s chat about this relationship with Cat at the end is so full of self-pity (“Everyone else has a boyfriend or girlfriend, why can’t I?!”) that it makes the entire thing feel hollow and kind of pointless.

Now, I’m being super-negative, but there are good things. The action, as stated, and also the performances are all good. Cat Grant herself is of course welcome back and her presence reminds of us some of the cool stuff that we’ve enjoyed in the past. Her dialogue about James dressing up like Darth Vader is genuinely funny (and indeed amounts to James’ best moment in the episode, even though he’s not present for it). And the show has got lots of potentially interesting relationships and story threads that it could pick up on for the future.

But it has also inspired little confidence in its ability to actually do that. Can the series actually find a way to juggle story concepts like Cadmus and its agenda, the issue of alien rights, the missing and mysterious Jeremiah Danvers, the threat of the White Martians, Lena Luthor’s long game, Kara’s life as a reporter, the fate of Mon-El, and the new rocket that we’ve learned has come from Krypton, and ultimately tell a coherent story out of it all? Can it keep Kara at the center of things by making her intrinsic to the plots and conflicts? Can it give all the supporting players a meaningful role in Kara’s life, and is it willing to drop them if they aren’t? Can it address social issues in a way that is serves the story, and not vice versa? Can the show get its act together and combine the epic-scale action with intelligent challenges, intriguing mysteries, and relationships we care about?

That’s the real cliffhanger for the end of Season Two. Right now, the situation seems dire, but you know, Supergirl is a hero, so I guess we can all have hope.