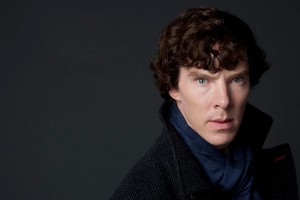 After a lengthy wait, Sherlock is finally back on our screens this weekend. The good news is it’s still one of the best, if not the best show on British TV.

The opening episode of the second series, A Scandal in Belgravia, wastes no time in resolving the huge cliffhanger from the first series finale. Sherlock (Benedict Cumberbatch) and John (Martin Freeman) were in the deep-end quite literally, locked in a standoff with arch-villain Moriarty (Andrew Scott). We’re not going to spoil anything about how this is resolved, save to say it’s surprising and bound to anger a few who will feel it’s a bit of a cheap get-out. The rest will be smirking at how outrageous it is.

Lara Pulver is excellent as Adler. She’s super-smart, sexy and more than a match for Sherlock, or so she thinks. Her first scene with Sherlock is particularly hilarious as we see our hero truly stumped and speechless at the sight of a “defrocked” Adler.

Benedict Cumberbatch is riveting to watch as the master sleuth. He’s still arrogant, cold, and calculating, but we also get a slightly more vulnerable side to Sherlock, now faced with his female equal. Does he have feelings for Adler? Can Sherlock love anyone else but himself? We’re not saying, but it is explored in a totally unconventional way.

Interestingly Martin Freeman’s role as John Watson seems a tad reduced in the first episode, which may have just been an inevitable consequence of the story focussing so much on Adler. That’s not to say John doesn’t share some great moments with Sherlock. Freeman still plays off Cumberbatch perfectly and his comic timing shines through at just the right moments.

Andrew Scott only appears in a few scenes as Moriarty. He still has a presence though, lurking in the background inevitably setting things up for a face-off in the third episode, The Reichenbach Fall.

Of all the supporting characters, Mark Gatiss’ Mycroft gets a much bigger role this time around and is clearly relishing it. Una Stubbs also has a little more to do as Sherlock’s land lady Mrs Hudson, and she even gets into a little bit of trouble leaving Sherlock to come to her aid.

Special mention has to go to director Paul McGuigan. This episode is incredibly stylish and inventive, with some clever transitional shots. The on-screen text returns and is used to great effect once again. This is all complemented by a wonderful musical score by David Arnold and Michael Price.

All in all, if the other two episodes can match the opener, this will easily be the best TV treat of 2012.

A Scandal In Belgravia airs Sunday 1 January at 8:10pm BBC1.