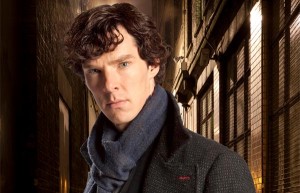 The BBC has announced that Series 2 of Sherlock has begun filming. The press release also confirms the story titles as A Scandal In Belgravia, The Hounds Of Baskerville and The Reichenbach Fall.

BBC One’s much praised, multi-award winning drama Sherlock, starring Benedict Cumberbatch and Martin Freeman, begins filming on location in Cardiff and London for a second series of three 90-minute films.The contemporary version of the Arthur Conan Doyle classic, Sherlock – co-created by Steven Moffat (Doctor Who, Coupling) and Mark Gatiss (The League Of Gentlemen, Doctor Who, The First Men In The Moon) – caused a sensation last summer, delivering an audience of over 8 million viewers, who tuned in to watch Sherlock and John Watson navigate a maze of cryptic clues and lethal killers in three thrilling action-packed adventures.

Steven Moffat says: “The three stories will be called A Scandal In Belgravia, The Hounds Of Baskerville and The Reichenbach Fall.”

Mark Gatiss reveals that when it came to sharing the writing responsibilities, Steven chose to do the twisted love story (Scandal) while he chose the Gothic horror (Baskerville) and Stephen Thompson (Silk, Doctor Who) is writing the thrilling finale (Reichenbach).

Commissioned by Ben Stephenson, BBC Drama Commissioning, Sherlock is directed by Paul McGuigan (Monroe) whose style and inventiveness contributed to the success of the first series, and Toby Haynes (Doctor Who, Being Human).

Series 2 will air this Autumn.

BBC & Netflix Team Up For Dracula from Sherlock Team