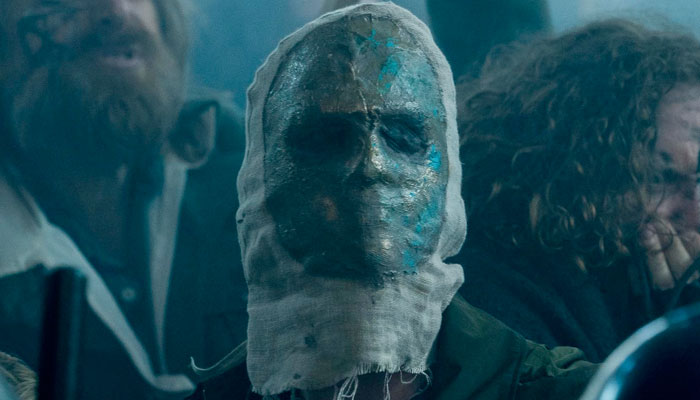 (This review continues spoilers. Read on if that doesn’t bother you!)

Channel 4 have garnered themselves a reputation in recent years for backing high concept (often dystopian) content that ranks amongst some of the best of television, from Utopia to Black Mirror. They lost one of their brainchildren Black Mirror to Netflix, leaving a suitable gap for another series taking in speculative science fiction stories and themes for us to mull over. Step forward Electric Dreams, a new anthology series based on touchstone of science fiction author Phillip K. Dick’s short stories, some of which have been adapted into films such as Blade Runner, Total Recall and Minority Report. To kick off the series we have The Hood Maker, adapted from Dick’s 1955 short story shockingly titled, The Hood Maker.

A key marker of Dick’s work was often his keener focus on character interactions over in-depth world building, whilst leaving plenty open to interpretation to the reader. And that’s instantly true at the incitement of this episode, where after a mysterious opening scene by a river, we’re thrown into a riot, where “Normals” are protesting the encroachment of “Teeps”, telepathic humans that Normals fear will invade their minds and the world. There’s no answers in the duration about how the world of The Hood Maker came to be, and how the Teeps came into existence (although co-star Richard Madden has detailed the facts in an interview). By removing this key exposition, we’re placed immediately into the situation, helping us feel the anger and resentment that is coming so keenly from both sides of the confrontation. It allows us to formulate our own stances and use our imaginations to fill in the gaps, which I appreciated.

The story of The Hood Maker sees Ross, a “Clearance Agent” working for the government and played by Robb Stark himself Richard Madden, assigned to discover the mysterious individual known as the “Hood Maker” who is producing special hoods which prevents Teeps from reading the mind of the wearer. Thanks to the recently passed “Anti-Immunity Bill” Teeps are now employed by the state, so to assist him Ross is paired with a Teep named Honor, played by Holliday Grainger, who he is naturally sceptical of as the rest of the Normals and wary of the Teeps intentions. As Ross and Honor progress their investigation and get closer to the Hood Maker, they slowly learn more about each other and grow closer, despite both being unsure of the other’s intentions in this chaotic world.

The world we’re living in in The Hood Maker is one that is resolutely lived-in, with no uncertain praise to director Julian Jarrold and his production team. There are shades of Blade Runner wherever you look, from the strange archaic production design of a world gone post-technology, the grimy streets and dimly lit buildings to even the cowboy-esque aesthetic of Ross, hat and all, with a jacket that would make Deckard himself proud. This 70s-esque world creates a wonderful juxtaposition between science fiction concepts being presented and the feel of a society stopped dead in its tracks for decades, a success of writer Matthew Graham that is likely informed by his veteran work on time-bending gritty cop shows Life on Mars and Ashes to Ashes. The run-down streets are all low ceilings and cramped areas, purposefully keeping us enclosed to the drama and escalating tension that unfolds, right from the opening claustrophobic riot. It’s a melting pot of society reaching boiling point.

The reason this society is about to break apart is because of the existence of the Teeps. Teeps in this world are your racial analogue for just about any oppressed minority in the past or in the world today, and due to that The Hood Maker feels highly uncomfortable to watch at points, a reflection back to us in our current world that all the best science fiction does. Teeps are undoubtedly second-class citizens in this world, looked down upon, feared and given disgusted glances even when just walking by in the street. Teeps are forced to work for the benefit of the Normals, thus leading to Honor being assigned to Ross in his mission. She’s the first Teep on the force, and there’s immediate distrust from her peers, except seemingly from Ross, who corrects his captain when she calls Honor an “it” rather than a “she”. We’ll see by The Hood Maker’s climax that this wasn’t the case at all, but it’s an effective pivot point for this reason both in establishing their initial relationship and then turning it on a penny when the final reveal of Ross’ intentions comes clean. However, both have their mistrusts and reservations, as at the blossoming of their partnership Honor is naturally wary of Normals. Working so closely with Ross, and becoming close with him, she finds herself re-evaluating her stance.

And that isn’t an easy stance to change of course, because her fellow Teeps are living in awful conditions, squashed together on bunkbeds in ghettos, some forced into sex working. Sympathy is garnered early from a harrowing experience of how Teep sex working operates, with Annieka Rose’s Mary dragging up a high-ranking visitor’s darkest fantasies for his pleasure, clearly mentally damaging her. The Teeps can all feel each other’s emotions and feelings through their mental “vine”, connecting their experiences, and the aftermath of Mary’s crushing experience is a highly sorrowful moment of the Teeps in Honor and Mary’s bunk-room all repeating Mary’s memories in their sleep. Despite not keying us into how the Teeps came about, moments like this allow us to understand their day-to-day experiences and understand why Honor’s fellow Teeps are so mistrusting of Honor working with Ross, as they just see him as “one of them”.

The arguments on Teeps presented by The Hood Maker isn’t entirely black and white either, mainly thanks to Holliday Grainger’s fantastically compelling show of duality in her performance as Honor, as she fights between her new role as Ross’ partner and what is possibly her true role as being a revolutionary in the Teep’s fight to live a normal life. She has taken a step to achieving this by joining the state, so the pull between her new role and her kinds reality creates a beautiful confliction in her performance. While the Teeps are very much sympathetic, we are shown exactly why Normals may be so afraid of them, when Honor interrogates a suspect with a brutal psychoanalytic assault, where you see the potential of the Teeps power. It’s chilling stuff, with the victim clearly highly distressed as his attempt at resisting via a tongue-twister fails with Honor beginning to put words into his mouth, a frightening moment reminiscent of Doctor Who’s Midnight. Honor even admits she “went in too hard”, with Ross clearly unnerved watching. This scene gives the Teeps a slightly greyer morality, giving understanding to the Normals fears suddenly.

For all this moment gives us though, we’re given so much more to sympathise with their cause and how the two sides can work side by side. A wonderful shot of Honor instantly providing Ross with information they need for the case as the camera pulls back slowly to a room of stunned co-workers shows their potential use of powers for good. But it’s Grainger’s Honor that grounds us in this; all the Teeps, or at least she, wants is a normal life, and it’s the smaller scenes that leave the greatest impact, namely in the moment she tries on one of the hoods. She spends the duration of The Hood Maker talking about the constant noise in her head, so to see those voices silenced in this scene is especially powerful- the possibility of a normal life.

The 70s aesthetic isn’t the only thing that Matthew Graham cribs from his previous credentials, with The Hood Maker built on the burgeoning buddy cop (and more) relationship between Ross and Honor. Ross’ little quirks such as his obsession with his hat keep him humanised early, and their relationship feels real and grounded, and given the fact that most of the story is told through Honor’s viewpoint of mistrust it’s more effectual when Ross’ eventual beginning anti-Teep views are revealed after spending the episode trusting him, especially after Honor mentions multiple times that she feels something different around him, as if he’s different too- only to discover it was simply the fact he couldn’t be read and was withholding his true initial feelings from her on his mission to win her trust. The fact the episode succeeds in developing their relationship in such a short amount of time allows that final moment between the two to be emotionally effective, and while I completely understand why some would be unsatisfied that the book closes just as the action reaches the crucial breaking point, I felt this was exactly what was needed, to keep you questioning if Honor opened the door, and if Ross’ intentions were actually good after all.

While I would’ve loved to have spent more time in this gloriously created sandbox, you should always leave the audience wanting more. Despite the confrontation with the Hood Maker himself seeming almost rushed to me, the payoff is more than worth it for a strong start to Electric Dreams. After all, it was never about the Normals and the Teeps; it was always just Ross and Honor.

Electric Dreams: 110 “Kill All Others” Review