Doctor Who: 712 “Nightmare in Silver” Review 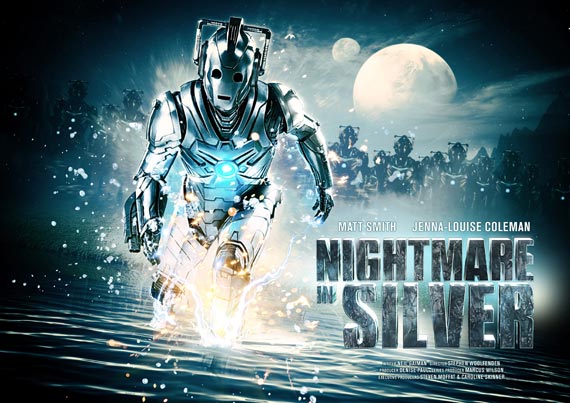 “We all know there are no more living Cybermen.” – Impresario Webley

Neil Gaiman won acclaim with The Doctor’s Wife. It was a modern classic, presenting a singular and captivating twist on one of the show’s enduring relationships, whilst showcasing Gaiman’s trademark surrealism, and fascination for the grotesque and uncanny. In Nightmare in Silver, Gaiman refashions one of the Doctor’s perennial adversaries: the Cybermen.

In recent years, the Cybermen have become something of a joke: Closing Time is the oft-cited indictment of their fall from grace. The Cybermen are potentially one of the show’s more grounded, and therefore realistic, enemies. The Cybermen exist as a reflection of human integration with futuristic technology – as conceived by their progenitor, Christopher ‘Kit’ Pedler. The Cybermen are naturally host to an ‘uncanny’ factor, as well as connotations of ‘body/psychological’ horror: they are us. They potentially call into question the definition of our own humanity, and notions of progress, as we posit a (dystopian, barbaric) future wherein the human being effectively ceases to exist; individuality superseded and supressed by homogeneity and uniformity. Gaiman, fortunately, capitalises on this interpretation, returning the Cybermen to form.

By the time of Nightmare in Silver, the Cybermen are purportedly extinct. They are now ‘mythic’ bogeymen: figments of children’s bedtime stories. (The juxtaposition of more ‘fantastical’, or ‘chimerical’, storytelling elements with a cold, harsher ‘reality’ is typically Gaiman, particularly profound in Silver, as the ‘reality’ manifests in the Cybermen themselves.) The Tiberon Galaxy, stage of the Cyber-Wars between humanity and the Cyberiad, was eradicated a thousand years ago, in one final, desperate act to eliminate the threat of the Cybermen. Porridge explains to Clara: “It’s hard to fight an enemy that uses your armies as spare parts.” Gaiman depicts the Cybermen as a formidable militant force: virtually undefeatable, they’re capable of automatically updating their design to counter any flaws and weaknesses (just as human technology constantly improves). These Cybermen are an intergalactic legion, with a multitude of new abilities, a product of Gaiman’s ingenuity and foresight, as the Cybermen now have alternative, innovative, selling-points for future writers to consider. Detachable body-parts, and rotating heads, lull both characters and audience into a false sense of security. Gaiman accentuates the superhuman facet innate to the Cybermen. The Cyberman’s super-speed, for example, leads to impressive direction from Stephen Woolfenden, as time literally slows down around the Cybermen: one of many compelling visual tricks throughout the episode.

Gaiman also replaces the Cybermat with the miniscule Cybermite, a more efficient design overall – and creepier too (the Cybermites emerging from the eye-sockets of the inanimate husk of the chess-playing Cyberman (itself an allusion and homage to the Turk) is akin to a horror-film of insects crawling out of a corpse).

Gaiman ostensibly draws inspiration from Ben Aaronovitch’s Remembrance of the Daleks: children being converted into Cyber-Planners is similar to the Dalek Battle Computer, which utilised the imagination of a young girl. It makes perfect sense. As beings of rationality and logic, the Cybermen do not possess imagination. Conversely, children, with their infinite cognitive potential – of unfathomable value to the Cyberiad – think imaginatively and spontaneously. It’s the inability to think ‘outside the box’ (as it thinks only along rules and logic governing the game of chess, and it cannot anticipate the outcome of the Doctor’s three moves to checkmate) that leads to the Cyber-Planner, Mr Clever’s downfall, in a stroke of brilliance.

As a highly allusive writer, it’s unsurprisingly Silver should convey this trait of Gaiman’s writing, adapting literary/historical allusions into science-fiction concepts within the show’s fictional mythos. The introduction of a Cyber-Valkyrie draws upon the Valkyries of Norse mythology: female figures that decided which soldiers, who’d died on the battlefield, were worthy of an afterlife in Valhalla. Likewise, the Cyber-Valkyrie was built to house critically damaged units for repairs, presumably those who were entitled to a second chance at ‘life’.

Gaiman does not limit himself or his storytelling: removing the Cybermen’s incapacity to convert non-humans (such as Time Lords) opens up many creative possibilities (previously raised in The Flood: it’d enable the Cybermen to multiply to a near-infinite degree, utilising any species). This artistic development can be construed as the Cyberman parallel to human evolution, gradually surmounting the obstacles presented to our respective fundamental natures, in both nature and science.

It should be evident now that the Cybermen are an embodiment of the ‘Other’: a perversion and distortion of humanity; a mirror of our darker nature (think of Jekyll and Hyde as a classic example). The Cybermen were, after all, envisaged as a (prophetic) social commentary (as highlighted in Rise of the Cybermen). In ideological pursuits of ‘conquest’ and ‘perfection’, we lose sight of what crucially matters – of what it means to be human.

It’s a refreshing twist on the conflict with the ‘Other’, as the Doctor challenges his own doppelganger in the Cyber-Planner: a disembodied artificial intelligence that possesses the Doctor’s brain and body. The mindscape is a fantastic visualisation of mind-body dualism, as the Doctor and Mr Clever fight for control of the Doctor’s brain and body, settling their stalemate over a game of chess – a quaint image, against the backdrop of potential apocalypse. In stark contrast to the Doctor’s altruism and compassion (he sacrifices his queen, and costs himself the game, to save the Maitland children), the Cyber-Planner displays a devilish, guileful, and sociopathic personality; haughty and overconfident. It admonishes the Doctor for his emotions, although, ironically, not acknowledging its own emotional responses. Presumably, its possession of an actual personality is in accordance with its ability for independent thinking, to ensure the survival of the Cyber-race. It’s also an entertaining ‘dual’ performance from Matt Smith, not attempted since The Almost People (another story involving conflict with the ‘Other’).

The Story: Other Positives

The punishment platoon led by Captain Alice Ferrin are typical Gaiman social misfits. The ‘poor’ acting (“I’m in the army!”) is deliberate and humorous, whilst being satisfying. The Captain herself is an extreme example of the damaging effects of propaganda, as evidenced when she recites a mantra (“Live for the Empire, fight for the Empire, die for the Empire”), suggesting hers was an indoctrinated youth.

There’s a clever twist on the ‘Doctor who?’ leitmotif, as Gaiman addresses the fact the Doctor could be reconstructed “from the hole [he’s] left”, cementing the character within a deeper layer of mystery. It’s also a call-back to the parallel between the Devil and the Doctor, first suggested in The Wedding of River Song, as the Devil can be described as ‘the hole in things, the piece that never fits’: both capable of destructive power, inspiring trepidation, superstition, and terror, subject to multifarious interpretations. Indeed, Nightmare in Silver is effectively the Eleventh Doctor’s showdown with the Devil/Cyber-Planner.

Warwick Davis’ performance as Porridge (in actuality the Emperor Ludens Nimrod Kendrick, who has fled his imperial duties, and gone into hiding) is memorable, effortless, heart-warming, and poignant – and Davis makes the most of some lovely dialogue (“Loneliest job in the universe”).

The Story: Other Observations

I’m inclined to be lenient of the performances of Eve de Leon Allen and Kassius Carey Johnson, as Angie and Artie respectively. They’re not wholly dreadful, by any means. Their performances fluctuate depending on the scene, though Allen’s the superior actor, potentially. While Angie is annoying when she storms off after learning there’s no phone service (why did she expect there to be? It’s a strange cause for complaint from a supposedly intelligent, observant character), Allen isn’t at all bad during the denouement on the Imperial ship, when she lightly chides Clara for declining Porridge’s proposal. The Maitland children weren’t entirely necessary additions, but they do provide a dramatic focus for the Doctor’s compassion.

In conclusion, Nightmare in Silver is ambitious, action-packed, intelligent, and thrilling. It’s the perfect redesign of the Cybermen, and another wonderful tale from Gaiman.

Doctor Who: 12-10 “The Timeless Children” Review