Agents of SHIELD: 110 “The Bridge” Review 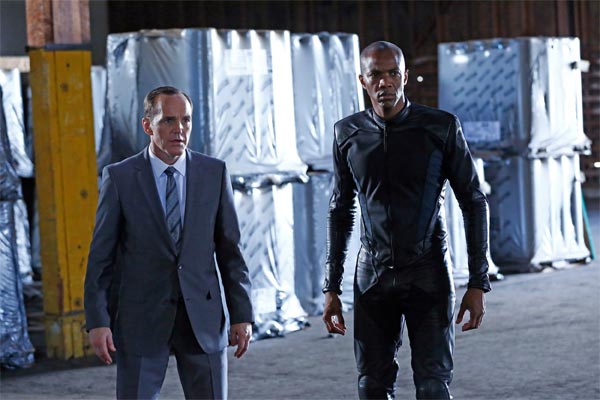 Now this is more like it: finally, with the mid-season finale, Agents of S.H.I.E.L.D. brought the metaphorical thunder and began to gather together all those loose ends that have been dangling throughout the early episodes. In doing so, the showrunners were able to create an engaging, action-packed episode which demonstrates that this show is able to live up to the expectations we’ve all had of it.

After a super-powered raid on a high-security prison by members of Project Centipede, Team Coulson decides to take the fight to them, and set about trying to track the evil scientists down, with the help of a superhuman of their own: Mike Peterson from the pilot episode, who is now working with S.H.I.E.L.D. and trying desperately to beat Captain America’s training records. As it turns out, while the team don’t particularly trust Peterson due to his somewhat incendiary track record, but he holds no grudges against them for what they did in the pilot: in fact, he’s grateful to them, as the bullet from the Night-Night Gun stabilized his system and stopped the Extremis in his body from going all ‘explodey’. It’s all a bit convenient, but it fits in well with the ‘everything is connected’ theme of the episode, and wraps things up relatively neatly.

Anyway, the team soon identifies the prisoner the Centipede soldiers broke out of prison as Edison Po, a tactical mastermind and all-round unpleasant sort of chap who has a penchant for stabbing people in the eyes, and also manage to identify Raina, the girl in the flower dress from the episode of the same name, as Po’s only visitor the whole time he was in prison. Through some technological nonsense, Skye also manages to find out that the pair of them had a conversation about ‘The Clairvoyant’; on top of this, the team manage to track one of the Centipede soldiers down to a warehouse where they are ambushed by three of them.

After the big fight, it is also revealed that Centipede were behind the eyeball-cameras from the ‘Eye Spy’ episode, and have been controlling the Centipede soldiers with them all along, killing them when they outlast their usefulness. The feed from the camera allows Raina and Po to see that Peterson, their first test subject, is able to operate without the regular injections the other soldiers require to stay super, and claim that he is the key to stage 3 of their experiments, and so they take Peterson’s son Ace hostage and threaten his safety if he doesn’t hand himself over.

Naturally, he agrees to this and asks Coulson to escort him to the exchange point on a bridge, where it is revealed that the person Centipede is really after is, in fact, Coulson. They take him away, give Ace back to Peterson, who apologises to Coulson and heads back to the team, who are more than a little bit surprised to see Coulson being taken away. Then, when Peterson goes back to correct his mistake, the bridge, and Peterson along with it get blown up by Centipede, and the team loses Coulson altogether in the flames.

As the episode, and the first act of Agents of S.H.I.E.L.D. draws to a close, Raina informs Coulson that all they want from him is the secret of what happened the day after he died, which is apparently something they need to continue with their super-soldier research: I guess it’s not going to work out all that well for Coulson when they find out that he’s as much in the dark as them when the show returns early next year.

It’s good to finally see Agents of S.H.I.E.L.D. taking some risks, and changing things up a little bit could really help refresh the show. It’s also nice to have the otherwise disparate threads of the plot, from Coulson’s resurrection to the sinister Project Centipede, all coming together to form something a little meatier and more satisfying than the flimsy one-offs the show has given us until now. Whether or not the show can capitalise on this and use it to create something bigger and better in the second half of the season remains to be seen, but after this episode all the seeds are there, they just need to make sure they are all used and not discarded or forgotten. We’re counting on you, showrunners!

Elsewhere, there is some awkward tension between Ward and May, with some obvious deeper feelings on both sides and even more obvious emotional repression and exterior badassery, also on both sides. I applaud the writers for moving away from the obvious Ward-Skye relationship and providing us with something which fits a little bit better in terms of the characters and their personalities, but I doubt whether it will take long before this particular relationship implodes and fades away.

Finally, Skye is still looking for her mother, and Coulson tells her that he and May are both looking into the matter, but secretly they are not because there is something important or dangerous involved in her mother’s identity. And just like that, as one or two of the plot threads are tied up, another one unravels further and further, and unfortunately it’s the one that is least interesting to me.

While far from perfect, ‘The Bridge’ is a big step up from what Agents of S.H.I.E.L.D. has been bringing thus far, and the prospect of getting some closure on the long-running plotlines is tantalising, although I suspect at this stage the answers will only bring more questions. Here’s hoping that the writers can build on this in the New Year, otherwise we could be in for 12 rather boring episodes.